The reconstruction works on the TF-1 pavement in Tenerife were completed last August. Thanks to this project, the pavement has been upgraded and is now mainly made of recycled material.

It is important to emphasise that the Canary Islands, and therefore also Tenerife, have a fragmented territory due to their orography and that 42% of the territory is subject to environmental protection regulations: in the Canary Islands there are severe restrictions on the supply of raw materials necessary for the construction of large works (e.g. aggregates).

For this reason, the government authority of Tenerife (known as Cabildo de Tenerife) sought a sustainable solution for the island. In the year 2021, a tender was announced for the reconstruction of certain sections of the TF-1 and TF-5 regional road, including as a requirement the use of 50% of hot RAP in the binder course.

The project was carried out thanks to the valuable collaboration between Sacyr Ingeniería and Iterchimica. The involved section of the TF-1 regional road is strategic as it runs from Santa Cruz de Tenerife to Adeje, from km 43+710 to km 80+900.

The TF-1 is a high trafficked road subject to the passage of 90,000 vehicles every day, as it connects the capital city Santa Cruz with the Reina Sofía International Airport and the port of Los Cristianos, creating a crossing point also for those people headed to the south of the island, where the main tourist attraction is located.

With its TF-1 road proposal, Sacyr achieved the best technical score in the tender. Iterchimica provided the technical support for the project. The tender envisaged a 50% reuse of the reclaimed material in the binder, thanks to the use of the rejuvenator Iterlene ACF 2030.

This is the first project in Spain that involves the reuse of 50% recycled material for pavement reconstruction. In this case, it was a corrective intervention but also a preventive one, as two sections with different characteristics were involved: the first one showed an evident deterioration while the second one could have been affected in the same way in the short term.

The environmental savings achieved are considerable: CO2eq emissions into the environment were reduced by 28% and energy consumption was cut by 30%. In addition, an economic saving of 24% was calculated due to the non-use of new material (bitumen and aggregates), as the use of recycled material saved 57% new bitumen and 63% new aggregates when compared to the traditional method.

Once the experience in Tenerife is over, it can be affirmed that recycling and circular economy practices should also be promoted in the road paving sector, especially in territories subject to environmental protection regulations. 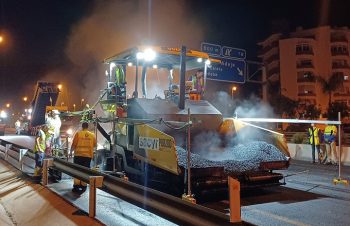